Reporting of health data for New Mexico sub-state geographies has formerly consisted of presentation of data at the county level. County-level presentation is problematic in New Mexico because of the large differences in county population sizes. Smaller counties such as Harding and DeBaca (with 2010 U.S. Census estimated population sizes of 695 and 2,022, respectively)1, have unstable rates on most health measures, while health measures calculated for Bernalillo County (2010 Census population estimate=662,564) lack meaning because the population is large and diverse.

The New Mexico Department of Health (NMDOH) decision to embark on the small area project was based on the intense demand for health status information at the community level,2 the desire to study the associations between health inequity and place, and the belief that a standard set of small areas would improve efficiency in production of community data reports and accumulation of comparable community-level data across various public health indicators and datasets.

From May of 2009 through November 2011, a workgroup consisting of staff from NMDOH, UNM, and others has met to design a set of New Mexico "Small Areas" for data reporting. The following design criteria were developed and used by the group.

Considerations for Presentation of Data by Small Areas:

The New Mexico "Small Areas" Workgroup reviewed research and considered methods for defining small areas. All methods have advantages and disadvantages. For instance, ZIP code boundaries are relatively easy to communicate, but the boundaries shift over time and commercial marketing firms must be relied on to provide estimates of population size and other demographic characteristics.

The group decided to develop the New Mexico Small Areas by aggregating census tracts using above criteria as a guide. In the 2010 decennial census, New Mexico has 499 reporting census tracts with an average population size of 4,127. All but two NM Small Areas (4) were defined by combining adjacent census tracts. Demographic characteristics from the 2000 U.S. Decennial Census were examined to meet criterion #3. 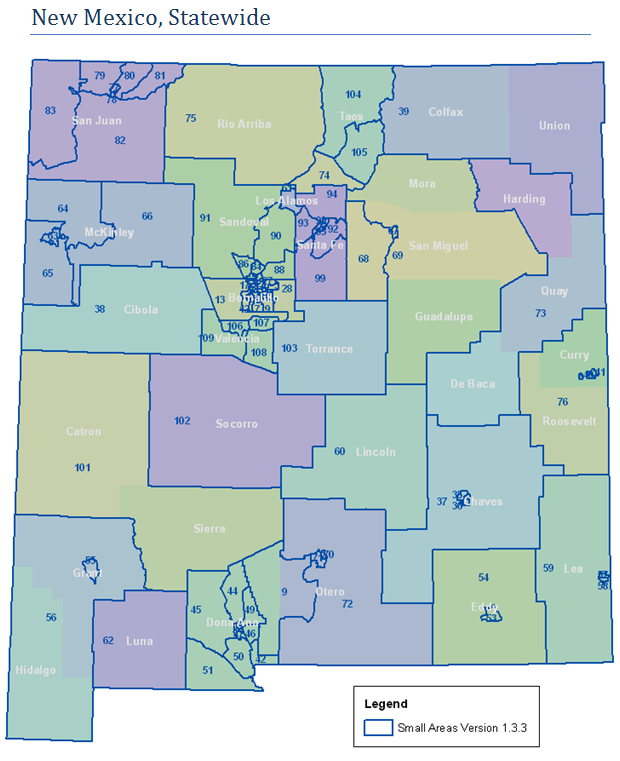 A decision was made to avoid using tribal geographies as a design factor in the 108 small areas. That decision was based on the following considerations, 1) it is NMDOH policy to release tribal health data and results of analysis identified by tribe to only the tribe, and not release them publicly, 2) New Mexico census tracts did not always follow tribal area boundaries, and 3) the NMDOH tribal epidemiologist is able to provide tribes with tribe-specific data and analysis of results.

Health event counts for a given New Mexico Small Area were derived by attempting to geocode the residential address of each decedent. Geocoding assigned each address an x and y coordinate that corresponded to the Earth's latitude and longitude. The accuracy and precision of the geocoding process depended on having a complete and correct address on every death certificate that could be matched uniquely to a standardized address in a geodatabase that provided the needed geographic coordinates. Death records such as P.O boxes or rural routes that could not be matched to a standardized address were geocoded with the most precise alternate geocode available. Often this was the geocode of a nearby intersection, or the geographic centroid of the ZIP code, populated place, or county referenced in the address. Certain conditions make it difficult to precisely geocode every death record, including:

It is important to recognize that small areas with misclassified data records will yield calculated health event rates that are higher or lower than the actual rate in that area. The New Mexico Department of Health is currently evaluating the small area rates published on NM-IBIS for misclassification errors. Until that evaluation is complete, please use those rates with caution and include the following caveat along with any report of your results:

Computation of death rates for a small area requires a count of deaths (numerator) and a population estimate (denominator) for each area and time period. The use of U.S. Census tract boundaries to define our small areas was based in part on the need for consistent geographies in the numerator and denominator. Census tract population estimates by year, age, sex and race for 2010 U.S. Census geographies for the years 1990 to 2010 were calculated by the Geospatial and Population Studies program at the University of New Mexico. (For more information on calculation of health event rates, please see the NM-IBIS page on Health Event Rates.)

6. Scharmen, Thomas (2011) An Inventory of Address Variables in 18 Years of Birth and Death Records. Presented at the October 5, 2011 meeting of the New Mexico Department of Health Small Area Workgroup.